I have been asked to do this many times over the years by readers, but have resisted due to the potential for misunderstanding and abuse of such a list. However, with such a huge array of products floating around out there, and the constant questions I get asking me to compare one brand to another, led me to believe that such a ranking system could be useful if used judiciously.

Getting this right was a bit thorny. Equipment from the Big Three (Meade, Celestron, and Orion) varies a lot up and down their ranges, so it was necessary to separate out certain models and lines. Meade, in particular, has a particularly long and rich history, and many of its models are separately identified. Also, telescope lines tend evolve over the years, so I have included my opinions on popular older telescopes as well. The term "older" generally refers to a previous version of a telescope still made (like the Coulters) while the term "old" refers to a telescope or manufacturer no longer around.

A word up front: This should not be your only source for decision making. Use it to get a rough idea of the telescope(s) that interest you, then consult the reviews (here and elsewhere.) This is a rough guide only. Use it as a jumping-off point for your own research, rather than any kind of final word on this topic. One thing I like to tell people is to mentally factor in a margin of error of plus or minus one category when viewing this. Prices given are approximate.

Evaluate your own needs while reading this list. The rankings are relative and not transferable from one type to another. For example, if you primarily like to look at faint galaxies, you might very well be happier with a large Newtonian from Category 3 than any refractor from Category 5. If you like to look at planets, the moon, and double stars, however, the reverse might well be true.

For first timers, the standard advice is still valid. A 6" Dobsonian is a great first telescope. Stay out of the department stores. Get binoculars and books if you can't spend at least $300. Finally, I'll add my own piece of advice in this electronic age: Use caution when buying any computer-controlled telescope costing less than about $1000. Also note that while most Newtonians come with a mount, some catadioptrics do not, and most of the expensive apochromatic refractors are sold as an optical tube assembly (OTA) only, making a first-rate refractor setup even more expensive than they already appear.

The categories are as follows:

Category 1: Not Recommended Telescopes designed and sold with price as the primary attraction, usually featuring inferior parts and having shoddy workmanship. These are "hobby killers" in the worst sense and are never used by serious amateurs. If all you can spend is $150, the old advice still holds true: get a pair of 7X50 binoculars and a few good books instead, or save up until you can buy something from Category 2 or better. Telescopes in this category consist largely of the ubiquitous "department store telescopes."

Category 2: Recommended With Reservations: These are serviceable telescopes in many ways, although with a little judicious shopping, you could probably get some- thing from Category 3 for about the same price that will show you more. Telescopes in this category feature scopes like the once-popular Astroscan, which isn't really considered a serious instrument these days, but which doesn't really belong down in Category 1. Also in this category are some of the cheaper electronic telescopes. Still, keep in mind that these are recommended; I have owned several telescopes listed in this category myself and have learned from many of them.

Category 3: Recommended: Telescopes designed and built with roughly equal considerations to price and quality. For most casual or semi-serious hobbyists, this is all the telescope that is ever needed. Telescopes in this category include the reliable mid-aperture Dobsonians and Schmidt Cassegrains from the Big Three, along with well-made older telescopes that show up on the used market from time to time.

Category 4: Highly Recommended: Telescopes built with quality and performance in mind, with less regard to cost. Scopes in this category include the fine Vixens from Japan as well as the overachieving Maksutovs from Russia. Also included are scopes which may have Category 5 aspirations, but which fall short for some reason or another. For serious enthusiasts.

Category 5: Highest Recommendation: Telescopes built to the highest optical and mechanical standards, marketed and sold to discriminating hobbyists who only want the best. Little or no consideration is given to cost. Most are small companies who have built their following through word of mouth. None are cheap, and the waiting lists on some models can stretch years into the future. 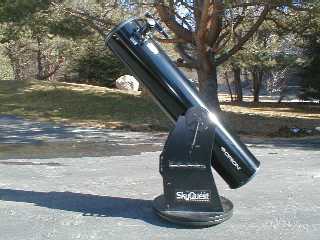 Commentary on Reflectors, 12/11: Happily, there are so many solid, recommend- able Dobsonians on the market today that it's hard to even turn around at a star party without bumping into one. I like the Orion XT series the best, but if Orion was out of stock, I'd probably call Celestron, Discovery, Meade, etc and order one of theirs. The venerable 6" f/8 reflector, which was the standard amateur telescope for nearly 25 years, is hardly ever seen anymore. 8" seems to be the ante now for serious beginners, and high-volume manufacturing is bringing them to the consumer at all- time low prices. Do not ignore the high end of the scale, where there are a number of small companies producing stunning instruments at very reasonable costs. Note that there are very few "real" Celestron Newtonians - for years they brand- labeled Japanese Vixen units (quality was very good to excellent.) More recently, they have started using reflectors from one of those unnamed Chinese factories (quality is decent, prices are low.) Also, old Meades are unsung heroes in the Newtonian world. Pre-1985 Meade reflectors are almost always worth collecting if in good condition.

Commentary on Catadioptrics, 12/11: Catadioptrics have been sneaking up on us lately. Once thought to be "all the same" (ie, average) by many serious observers, modern SCTs and Maks are generally of very good quality and are easily recommend- able for general purpose observing. The best Maksutovs, in fact, are thought by many to be a near equal to the modern apochromatic refractor, with prices to match. The key to catadioptrics: the newer, the better. Avoid the temptation to save a few bucks on an older unit unless you can personally inspect it. Although there are some superb older samples out there, in general you want the latest revision wherever possible. This is especially true of the Russian instruments (which are all fantastic bargains, by the way) and of the new, lower end computer controlled scopes. SCTs from both Meade and Celestron from the early 1980s are also somewhat suspect. Finally, it is a poorly-kept secret that the Celestron C 9.25 and the Meade 7" Maksutov seem to be better than other models in their respective lineups. Neither is a big seller, but perceptive and savvy consumers should take note of this and act accordingly.