Can You Use a Spotting Scope for Astronomy? 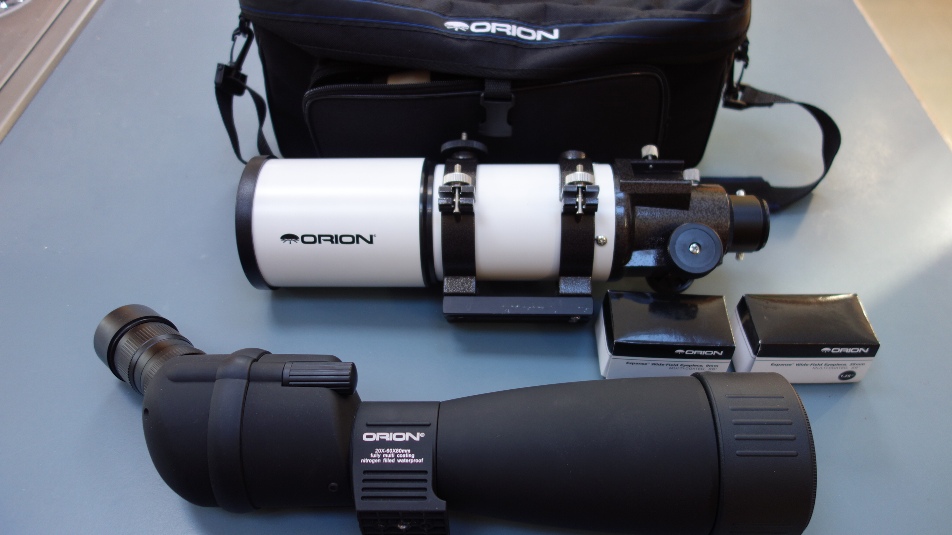 Can you use a spotting scope for astronomy?

I get this question all the time from terrestrial observers.  My response usually runs something like:

1) For terrestrial observations, you need something called a spotting scope.

3) See if there is someone on the web who does what I do, except with spotting scopes.

But I've gotten to wonder over time: Can you use a spotting scope for astronomy?  Over the record-breaking snowy 2014-2105 winter, I had a lot of time to ponder questions like this.  While browsing the Orion web site over the holidays, I somehow found their $299 spotting scope, #52421, in my shopping cart.  It arrived two days later in a long cardboard shipping container.  The scope is often discounted; check Orion's site if you're interested in buying one.  The scope has a rotating body, a small "backwards" focusing knob on the right side, a non-removable 20X-60X zoom eyepiece, a thin plastic screw-on lens cover, and a 1/4" X 20 mounting block.  I attached a Vixen-compatible mounting plate to the latter and placed it on my CG-5.

Orion's Short Tube 80 ($199, check Orion's web site for current prices and possible clearance specials) has been reviewed quite a few times on this site and elsewhere.  The scope is a known quantity in our hobby as a decent quality, low-cost quick peek scope.  As of this writing, it comes very well appointed for its price - rings, plate, 8X40 finder, 20 mm and 9 mm Expanse eyepieces, and a nice zippered carrying case.

With Orion's sale on the spotting scope, the two scopes are identically priced.  However, the spotting scope lacks a finder.  I have a Rigel Quik Finder ($45) that I've rigged for small scopes.  I drilled some holes in the finder's base and threaded a length of elastic I got from Wal-Mart ($.97) as a quick fix.  If you think it defaces the scope, you should know I also use it on my Questar (that loud noise you just heard is the horde of Questarphiles firing off nasty emails to me.)  The Vixen plate also costs about $20, so factor that in if you intend to use the scope the way I did.

Mike T and John R joined me that night.  We mounted both scopes on CG-5 mounts and went observing in single-digit weather.  I polled the guys as to their biases beforehand.  We're all biased, of course, but in this case, none of us had any idea how this would turn out.  We placed the scopes about 20 feet apart and walked between them.  To match powers, we used the supplied 20 mm Expanse eyepiece for 20X, and a 6 mm Radian to nearly match the 60X in the spotting scope. 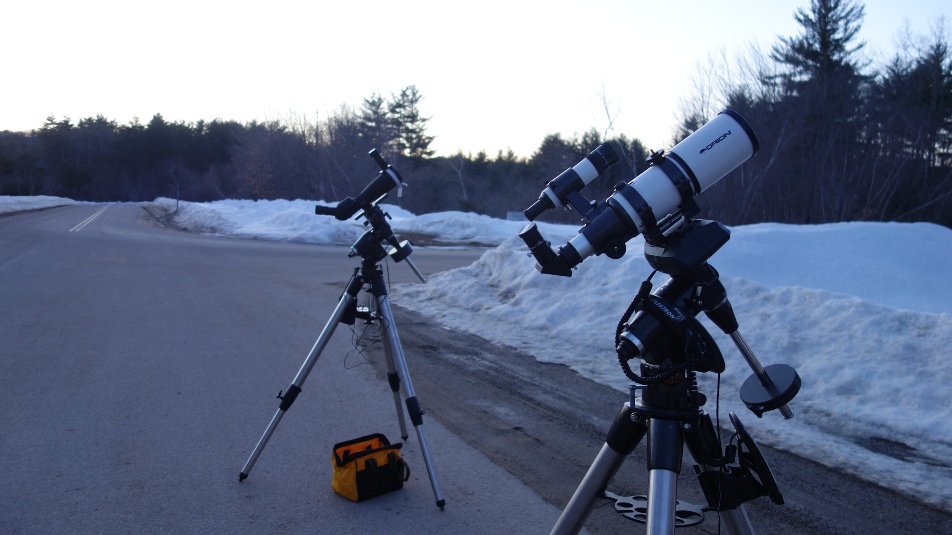 We star tested both scopes on Procyon.  The Short Tube 80 did quite well, considering its price.  There was very little spherical aberration, with the expected halo of false color.  The spotting scope gave us a little more to talk about.  It has a trace of astigmatism.  It had about the same amount of false color, but the aberration was more rose-colored than we've come to expect.  I would classify the spotting scope as an achromat, and given its price, I was surprised the star test wasn't a lot worse, with all of those prisms in the way.

On Jupiter at 60X in both scopes, the views were again too close to call.  All four moons could be seen this night, along with two cloud bands on the surface of the planet.  Every time one of us thought we preferred one over the other, it would turn out to be seeing conditions getting in the way.  It's a good thing the spotting scope capped out at 60X, because the image was already starting to degrade at that power.  We noticed the same thing in the Short Tube 80.  Neither scope is going to spend a lot of time at high power.  Another draw.

Deep sky yielded the same result.  On the Orion Nebula, both scopes looked the same, at both 20X and 60X.

No matter what we did, the scopes were nearly identical optically.  I was surprised - I expected one to be clearly better than the other, but it didn't turn out that way.

Mechanically, it was a different story.  Built for terrestrial use, the spotting scope lacks the astro-specific conveniences on the Short Tube 80.  We kept fishing around to find the tiny focuser, for example, a task made harder through thick gloved hands.  And I don't know why, but a 45 degree viewing angle never seems to feel right for astronomy.  The spotting scope did win minor convenience points for its rotating body and zoom lens, but overall, we all felt that the Short Tube 80 was easier to use.

So it's a close call, but if we had to choose, all of us would take the Short Tube 80 if we needed to go observing.

For an objective reference, I brought along my TeleVue 85 ($2300, OTA only.)  How did it compare?  Let's put it this way.  Remember in Star Trek when they beamed down to find two primitive warring factions?

The TeleVue 85 walked all over the spotting scope and the Orion Short Tube 80.  Blacks were blacker, stars focused down to impossibly small points, and the contrast was deep and satisfying.  False color left Procyon and Jupiter.  On the planet, we were able to push the power to 200X and it still looked good.  The Orion Nebula hung in mid air and had that reach-out-and-touch-it quality.  Neither inexpensive scope belongs in the same league as the TeleVue 85.  At nearly twelve times the price, it had better deliver the goods.  But there is a real difference, and if you've never looked through a good apo, visit a local star party sometime and treat yourself to its views.

So - to answer the question.  Can you use a spotting scope for astronomy?  The answer is yes.  If you're primarily a terrestrial observer who wants to look up at the night sky once in a while, it will do double duty for quick peeks.  If you're a regular reader of this web site, however, I think you're still better off spending the money on an astro-specific telescope.